The exact origin of nail treatments is unclear, since it appears to have originated in different parts of the world around the same time. In ancient Egypt, from 5000 to 3000 BC, women would dye their nails with henna to indicate social status and seductiveness.

Women of the lower class wore pastel and neutral shades, while the upper classes wore deep, bright shades. In Babylonia, 3200 BC, men, not women, painted their nails with black and green kohl, an ancient cosmetic. To prepare for war, warriors of Babylon spent hours having their nails prepared, hair curled, and other similar beauty treatments.

As in ancient Egypt, nail color indicated one's status, black for noblemen and green for the common man. Around the same time, 3000 BC, the first nail polish originated in ancient China.[1] It was made from beeswax, egg whites, gelatin, vegetable dyes, and gum arabic.

Chinese dipped their nails in this mixture for several hours or left it on to dry. Colors ranged from pink to red, depending on the mixture of the ingredients. During the Zhou Dynasty, 600 BC, royalty used this simple nail polish with gold and silver dust on their nails to show their social status.

The Ming dynasty (1368-1644) was known for extremely long nails. Sometimes, these nails were protected by gold- and jewel-encrusted nail guards.

Servants performed personal chores for the royals so their nails did not break or become damaged. Empress Dowager Cixi of China, who ruled from 1835 to 1908, was known for her outrageous nails.

Many photos show the empress with 6-inch-long gold guards protecting her long nails. All of the aforementioned did not use nail art as it is widely known today, only stained, dyed, or dusted the fingernails and toenails.

The first actual record of nail art was from the short-lived Inca Empire (1438-1533), which at that time was one of the largest empires in South America. Incas decorated their nails by painting eagles on them.

In 1770, the first fancy gold and silver manicure sets were created. French King Louis XVI, who ruled from 1774 until his deposition in 1792, always had his nails taken care of using these sets.

The Development And Popularity Of Nail-aert Throughout The History 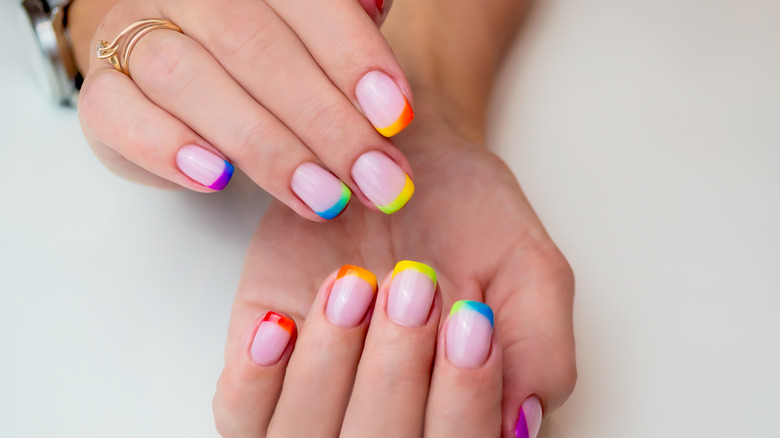 In the early 1800s, the modern manicure developed with the invention of the orange stick, a thin wooden stick with one pointy end, usually made from orange wood.

It was invented in 1830, by Dr. Sitts, a European podiatrist, who adapted a dental tool for manicure purposes. Previous to this invention, people used acid, a metal rod, and scissors to shape and trim the nails.

In 1892, Dr. Sitts' niece invented a nail-care line for women of any social class, which eventually reached United States salons.[8] Prior to then, women had short, almond-shaped nails and often used oils for additional shine or tint.

Not long after, in 1907, the first liquid nail polish was invented, although it was colorless. Soon thereafter, it was available in variety of different colors.[9] In 1925, the lunar manicure (today known as the half-moon manicure) was seen everywhere.

Reds and pinks were used on the nail bed, while avoiding the area around the cuticles. Then again in 1970s, the natural look was back in fashion and preferred by many women, but only for a short time.

[11] The French manicure style was created in Paris in 1976 by Jeff Pink, who was the founder of the Los Angeles-based cosmetic company ORLY. Nail painting came back in vogue in the 1980s and since then has been extremely popular.

Subscribe to get 10% off and special offers, beauty updates to come!